Earlier this summer the Canadian Securities Administrators disappointed investor advocates and did a disservice to Canadian investors when it announced watered-down reforms that failed to address conflicted investment advice and a best interest standard of care. Instead of much needed reform, investors got three paltry concessions from regulators:

Or so we thought. 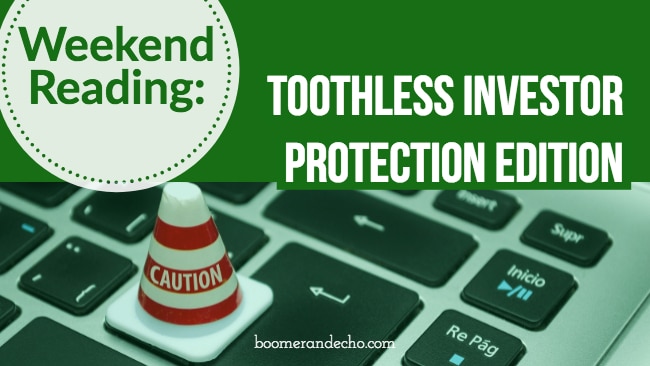 This week the new Ford regime in Ontario announced that it doesn’t intent to follow through with the proposed banning of deferred sales charges on mutual funds, saying “our government doesn’t agree with this proposal as currently drafted.”

“The CSA and [the Ontario Securities Commission’s] proposed amendments result from a process initiated under the previous government and, if implemented, will discontinue a payment option for purchasing mutual funds that has enabled Ontario families and investors to save toward retirement and other financial goals.”

It’s not right to charge investors to get their own money back (a deferred sales charge is a scheme that costs investors a percentage fee when they sell an investment within a seven year time period). Even Investors Group recognizes this and has put a stop to selling DSC funds.

It’s shameful that the Ontario government allowed the mutual fund industry to influence this proposal and thwart what would have been a small victory in the battle for investor rights and industry reform. If we can’t even get this proposal passed, what hope do we have for true investor protection and a best interest standard?

On Tuesday I reviewed Beat the Bank: Simply Successful Investing by Larry Bates. We had incredible interest in the book giveaway with a total of 123 entries. Thanks so much for your entries and insightful comments. Larry probably has enough new material from those to write Beat the Bank part two!

The winner of the book is Jan, who commented on September 11 at 9:44 a.m. Congratulations, Jan! I’ll send your book out in the mail this week.

On Friday I wrote about a new retirement study that suggested retirees might spend 130 percent of their preretirement income because every day is Saturday in retirement, and we tend to spend more on the weekend.

Grab a ticket to the Canadian Financial Summit and catch my session for free for the next few hours (depending on when you read this) or get an All-Access pass to watch all 25+ sessions any time, any place.

You can even get access to the lifetime library, which includes last year’s sessions where I spoke about my four-minute investment portfolio.

An interesting read from Budgets are Sexy: What everyone wants to do before they die!

The Humble Dollar blogger Jonathan Clements has a new book out (which I’m reading now) and he draws 31 of his favourite questions from it to help you figure out your money and happiness goals.

Desirae Odjick just got married (congrats!) and here she explains the one rule that prevented her from taking on more debt.

Readers had lots of questions about the New York Times’ recent story about the FIRE movement (financial independence, retire early). Here are some answers.

Canadians’ favourite credit card isn’t from one of the big banks. It’s from a grocery chain. This is not surprising, given the PC MasterCard’s cult-like following.

A great article from Nick Maggiulli on why your time horizon isn’t long enough:

“So when you consider what you want to accomplish in life, don’t forget that in order to build a great business, family, product, brand, community, or movement it will take longer than you think.  Soextend your time horizon and stop focusing on the coming week or quarter and start focusing on the coming decade and century.”

After reporting on personal finance, Joe Pinsker used behavioural economics on himself, making one simple financial change to lower his spending.

This updated rule of retirement saving has you working longer, running out of money sooner. Here’s the new rule of $20.

This man lost his savings when cryptocurrencies crashed. Perhaps it’s a lesson not to put $120,000 into Bitcoin?

Michael Batnick looks at the cryptocurrency mania and suggests the next mania will be Cannabis stocks.

Speaking of mania, this week marked the 10th anniversary of Lehman Brothers collapsing and the start of the global financial crisis. Tom Bradley shares five lessons from the financial crisis.

Thinking of a reverse mortgage? Rob McLister shares how that compares to a HELOC.

Finally, Apple had its big launch event this week, announcing three new iPhones. The Star’s Kerry Taylor looks at AppleCare+ to see if the extended warranty is worth it for these pricey smart phones.

Have a great weekend, everyone!