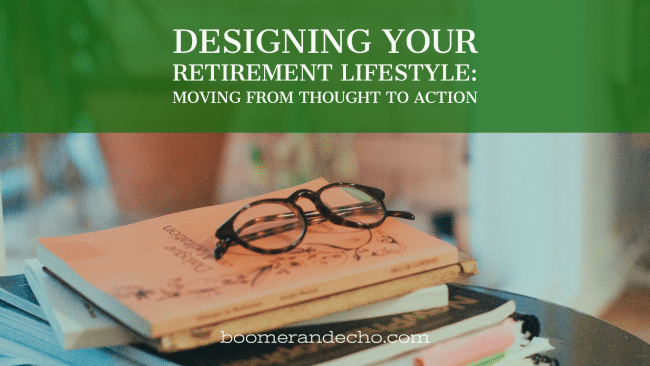 When you retire you want to be intentional with your time and focus on doing the things that will give you purpose and meaning, what makes you truly happy.

In this final article, I’m going to bring everything together by telling you one of my favourite retirement lifestyle design stories.

The first step in the design process is to figure out what gives you a sense of purpose. That we discussed in the previous article. The next step is to build a lifestyle around that using the nine retirement principles outlined in “Retirement Heaven or Hell” as the foundation.

We start by creating a weekly schedule for ourselves, which helps to create structure and routine in our lives, something we often lose when we retire.

By establishing a weekly schedule you make sure that you are making time for the things that are most important to you and the things you need to do in the short-term to hit your long-term goals.

Instead of drifting like most retirees, by using a schedule you will know exactly what you are doing, why you are doing it, and when. You don’t need to schedule every minute of the day. You just need to make sure you don’t miss doing anything important.

Make sure you schedule the things that make you happy

We learned from the famous “Nun” study that happy nuns live longer than unhappy nuns and the same principle applies to retirees.

Make time for practicing your art (whatever that means to you) as well as for exercise activities, volunteer work, going on new adventures, learning how to dance, learning a new language for that trip you have planned, and working if that will be a source of purpose for you.

And above all else, make sure to schedule some time each and every day for doing something you love with people you love.

Make sure you schedule your priorities first. These are your non-negotiables, the important things that you need to get done no matter what; your workouts, eldercare, taking care of the grandchildren, work and so on.

Once you’ve made time for them, then you can schedule in your other less important tasks, like cutting the lawn or getting a haircut.

A common mistake for many retirement “newbies” is being in a hurry to accomplish everything on their bucket list and trying to do too much in a short space of time. This will only end up making you frustrated and driving you a little crazy, like it did to me.

Our goal in retirement is to reduce stress, not create more of it. So, start slow, find your own comfortable pace, and avoid over-scheduling yourself by packing too much into a week. I know some of you are in a hurry to make things better, but Rome wasn’t built in a day and neither will be your retirement.

Don’t let your work or whatever form of purpose you have identified suffocate your other interests. You need to set boundaries so you can make time for other things that are important to you, and to make sure you stick to those priorities as well. If you allow your purpose consume most of your day, you will fall behind on your other key goals and may be forced to delay them or possibly give up on them entirely. I personally know this well because this is where I got into trouble.

I needed to finish my first book in order to get my new public speaking and coaching business going. I would get heavy into the writing, and before I knew it, it had consumed most of my day, resulting in me missing out on my workouts and other things as well. Ignoring my other key goals just to get the book done frustrated me and stressed me out.

To create your own version of retirement heaven, you need to find balance and the right mix of work, leisure, health and relationships. Working too much, or focusing on just one thing, throws everything else out of kilter. And it can come back and bite you in the butt hard.

Below is copy of my own schedule.  I write most mornings of the week (my purpose) and also make time for my workouts so I can stay healthy. I walk most days with my wife which gives us an opportunity to talk about things, and I make sure I make time to hang out with my friends and family. Also one day a week is devoted for my love of fishing.

Occasionally I will schedule in a special adventure like traveling to Italy or spending a week up at the George River fly fishing.

In this story about Jack you will learn how he used Ikigai to find new purpose and the built a wonderful lifestyle around that.

I enjoy telling this story because Jack’s story is similar to mine. He was packaged off from his 36-year corporate job and was suffering from a bad case of retirement shock. His wife asked me to talk to him to see if I could help get him out of retirement hell and back on track.

After the usual retelling of bank stories and the accompanying laughter (this is what ex-bankers do), it came out in conversation that Jack after a bad day at the bank would decompress after dinner by going down to the basement and working on renovating it. I guess hitting things with a hammer made him feel better, and it was far better than sitting down on the couch having a few beers and watching TV, like I did.

I asked him to show me his basement and it was just beautiful. It was quite obvious that Jack was good with his hands and knew what he was doing. After talking further, I learned that he had even built his cottage with his father. They built the whole thing by themselves, doing all the plumbing, electrical and woodwork, even the pouring of cement for the foundation.

Upon hearing this, I pulled out the laminated Ikigai diagram I always carry with me and we got to work. It was easy to figure out a good possibility for him: doing cottage renovations.

At first, Jack pushed back because of his fear of starting his own business, which I found interesting as he helped a lot of clients while in the bank run theirs. But Jack had never run his own business before and he didn’t know how he would be able to get customers.

Being a cottage owner myself, I told him that finding customers would be easy. Getting good tradespeople who show up when they are supposed to and do quality work on budget is as rare as winning the lottery. Cottagers talk, and I told him that if he did one job that was good, the word would spread and he would be up to his ears in work in no time.

Jack pondered things over for a while and eventually took the plunge, and before long, people were lining up to have him repair things for him.

This led to another problem though, as Jack’s wife got a little mad over him working so much. The three of us had another meeting where a compromise was struck: Jack would only work weekdays from nine to four and never on the weekends which were reserved for family who visited the cottage regularly during the summer. There was no working in the winter, and instead Jack and his wife would winter in Costa Rica and have the kids come down and visit during the holidays.

It was a win-win for everyone, but Jack and his wife decided to take it one step further. They sold their home in Toronto and used part of the proceeds to help their daughter buy a bigger house in a better area with a downstairs walkout. Jack fixed up the basement, and that is where they hang their hat when they are in town. When they are not there, their grandkids use the basement as a play area.

This arrangement also worked well during Covid. Jack’s wife spent a lot of time at their daughter’s house, watching over the grandkids and homeschooling them while the parents went to work. It was nice to know that the kids were being taken care of and there is nothing better than returning home to a home cooked meal at the end of a stressful day.

One last thing, Jack used the money left over from the sale of their house to boost their retirement savings and help save for the grandkids’ education. Jack is now living the life of Riley all because of a simple Ikigai diagram. Now that is what I call a smiling Jack!

This is just one example of the many success stories I hear from people about how they were able to design a retirement lifestyle that works for them and if they could do it, there is no reason why you can’t too.

I hope you enjoyed this series and that it gave you some new ideas on how to plan for your own retirement lifestyle.

Mike Drak is an author, public speaker and recognized authority on the non-financial aspects of retirement. After having spent 38-years in the financial services industry, Mike retired and personally faced what he called “retirement shock”. During this time, Mike found himself on a journey of self discovery and authored two best selling books on retirement; Victory Lap Retirement and Retirement Heaven or Hell: Which Will You Choose?. Mike is a Senior Contributor at Booming Encore and dedicates his time to helping other retirees design a fulfilling, meaningful retirement lifestyle for themselves.